This is the story of George 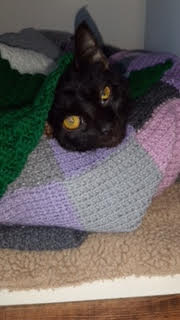 This is the story of George.  This was not his original name but we decided he needed a fresh start.

He was rescued from a home where he had been neglected and starved.  He is 11mths old and weighed just 2kg.

He was semi conscious and could not stand.  He had such a heavy flea infestation that a comb would not go through his coat.  I took the decision to bath him to rid him of them as quickly as possible.  The rinse water was bright red from his blood.

He had severe anaemia, his gums were white, as were his ears and skin.  He was so weak he did not move throughout his bath and blow dry.  He managed to eat about a tablespoon of Applause shredded chicken.

We could do no more for him so he was tucked up in a blanket next to his heater.  We all hoped he would survive the night but we were not confident.  We were all in tears over the condition of him.

I went to his pen 6.30 the next morning with my heart in my mouth.  There was no sign of life.  I called his name and the blanket moved and out popped his lovely face.  I sent his photo to the others who were so relieved.  The next day we tackled his disgusting ears and he was wormed.  He also had a manicure as his nails were so long.

At first we had to tempt him to eat.  We had to stay with him while he ate or he would stop.

We let him out daily for a walk around the garden to strengthen his muscle.  He is enthralled with everything, especially the pond!

I noticed he was repeatedly licking concrete.  I knew this was a sign of mineral deficiency.  He went to the vet who confirmed the severe anemia had caused a lack of iron.  Nothing that a good diet wouldn’t eventually fix.  The vet says it will be 4 to 6 weeks before he is fit.

He has so many friends here to love and nurse him.  He is a very rare cat as he is grateful!  He is so pleased to have the care and attention.

He is a very sweet little boy who didn’t deserve to be treated as he was.

George needs to gain a lot more weight before he can be neutered, vaccinated and microchipped.  He is not looking for a home as he has a long road to recovery and will stay here until he is fit. 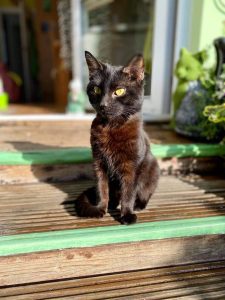 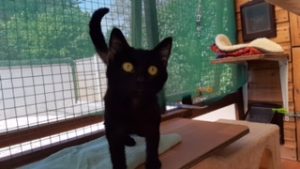 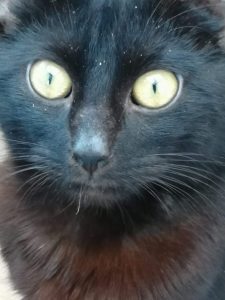